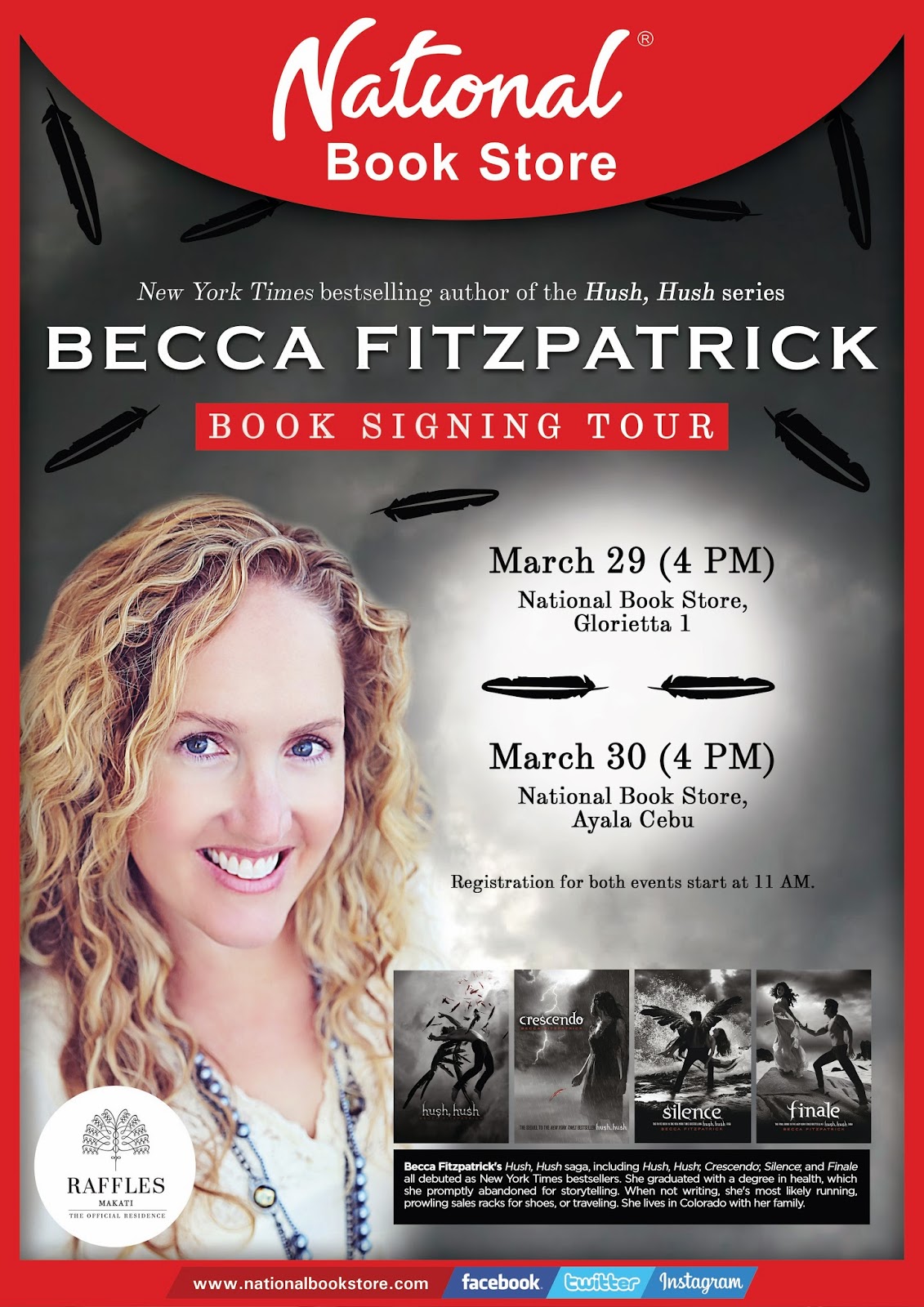 The following photos were taken from a phone camera. 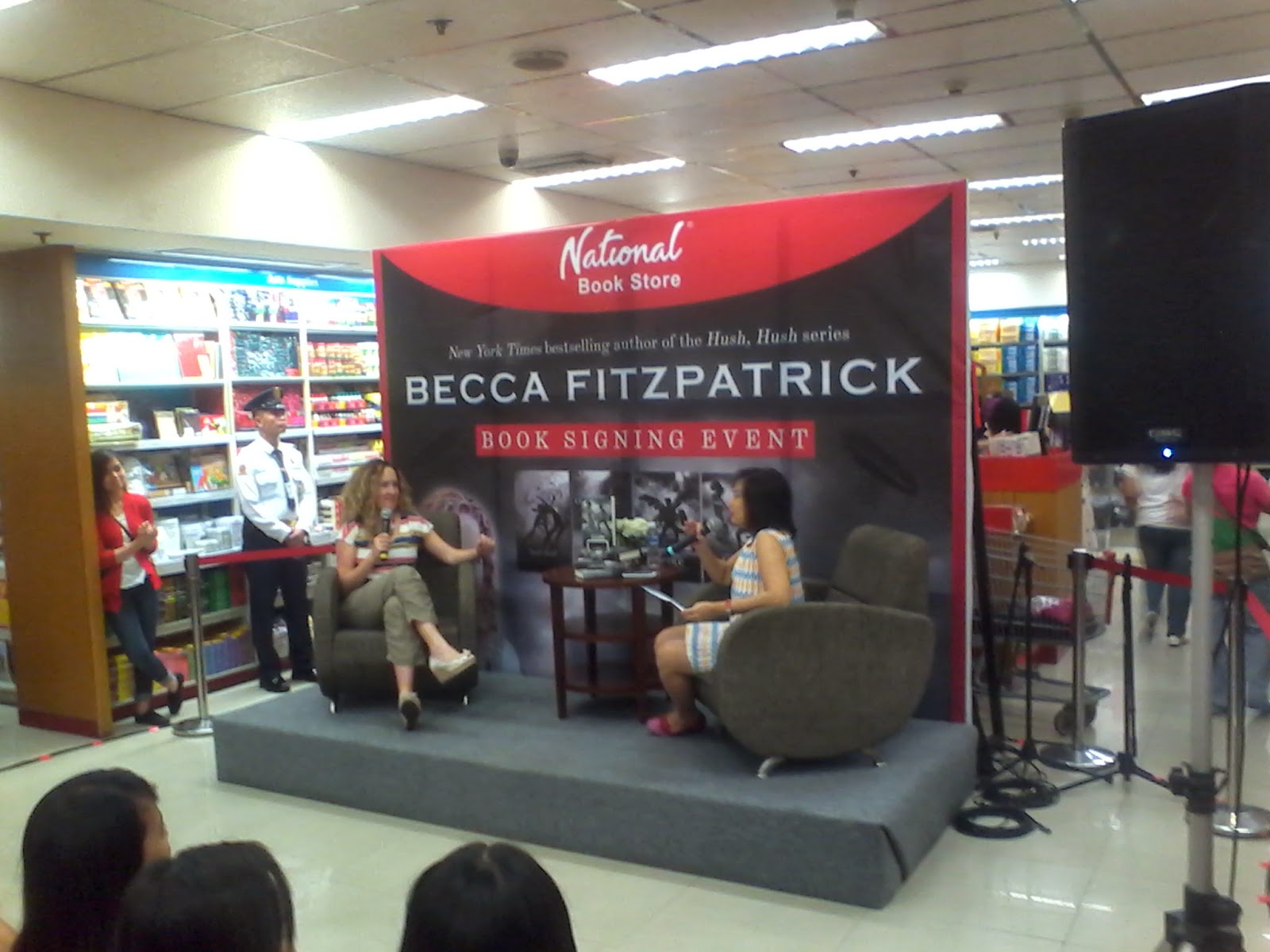 
Some of the questions were: 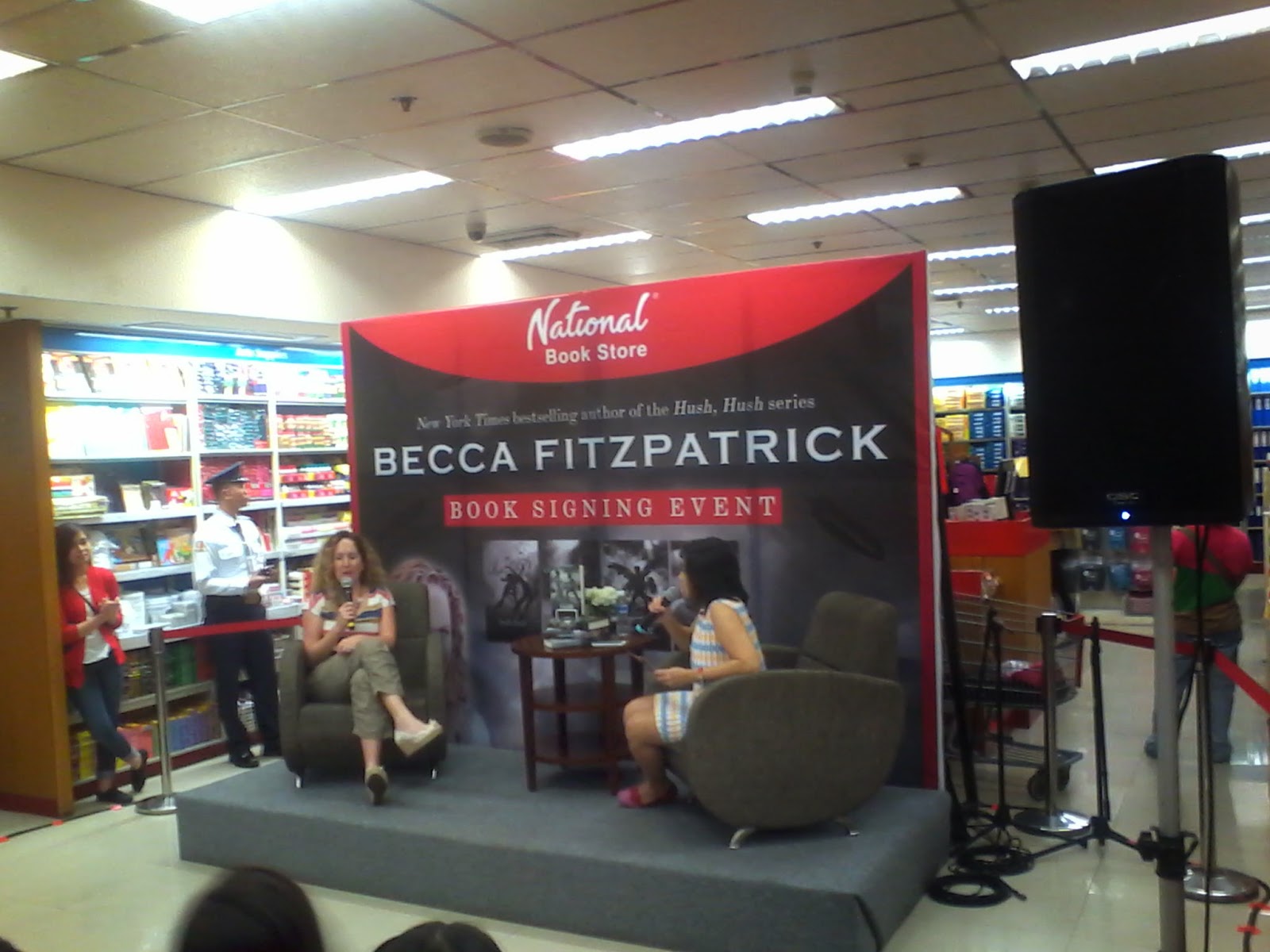 "Is Patch inspired by a real person?" Becca said that he was. *cue the squealing*. The guy who inspired Patch is from her high school, she said he looked "dangerous and rough" and even admitted that she looked him up on Facebook, but unfortunately didn't find him.

"How did you come up with the book titles?" She said she got 'Hush' and 'Crescendo' from the dictionary and 'hush hush' particularly, fits the story, because Patch was keeping a lot of secrets.
The title of the last two books, 'Silence' and 'Finale', was her editors idea.

When questions about the movie production was asked, she answered that it has been optioned, and that she won't be writing the script, neither will she decide the cast.

And the last discussion was about her new book Black Ice. Which will be officially released on October 7th 2014 by Simon & Schuster.

Posted by Unknown at 9:03 pm No comments:

YA Books on the Big Screen

A Young Adult book that's being made into a movie is an exciting thing for me, but at the same time, I find myself dreading the outcome. Not because I didn't like the book, but there's a huge possibility that Hollywood will just ruin the books I like. *cough* Percy Jackson *cough*
But even if that's the case, I'd still try and watch all the movies.

Here are some of the books that will be hitting the big screen.

The Fault in our Stars

Movie trailer: Not released yet.


Movie trailer: Not released yet.

Email ThisBlogThis!Share to TwitterShare to FacebookShare to Pinterest
Labels: Movies 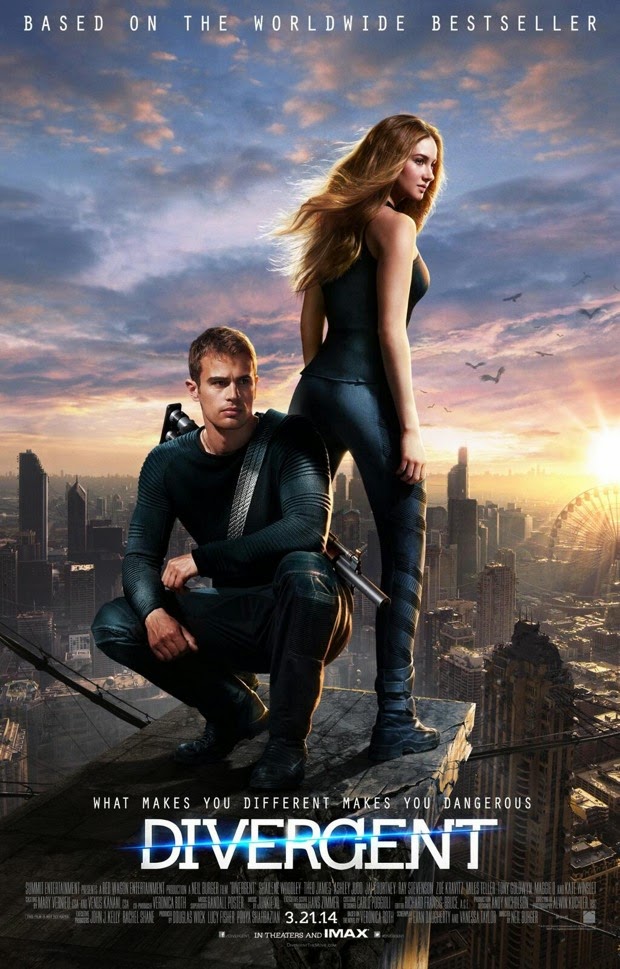 Oh my gosh. The movie was so good. Of course, there were scenes from the book that weren't included, but almost every scene was exactly as I imagined. I even got goosebumps while watching. So, it was all good.
I cried at the part where Tris tried the zip line for the first time. "Why?" You ask?
Remember Four/Tobias zip lining in the last few pages of Allegiant? Yep, that's why.
It was suddenly like:

The people sitting to my right (who haven't read the books) looked at me funny.

Here's the thing about watching 'book-turned-movie' movies. Let me 'paint the picture' for you.
Say, you've read the whole Harry Potter series, but never watched the movies. You're watching The Sorcerer's Stone for the first time and it's in the scene where Severus Snape first appears. Then you suddenly remember the "Always" scene in the 7th book. Instead of getting mad at Snape for being downright mean to Harry, like all the people who haven't read the series, you feel all the feels from the last book.
It's inevitable, I tell you.

Anyway, it was weird seeing Ansel as Caleb and Shailene as Tris being siblings. With the TFIOS movie and all.
Oh, and I just knew that Tobias is pronounced "Touh-by-as" and not "Touh-bee-as". I've been reading and pronouncing it wrong. *facepalm*

Posted by Unknown at 3:07 pm No comments:

Review: Reclaiming the Sand by A. Meredith Walters

Bully and victim. Tormenter and tormented. Villain and hero.

Ellie McCallum was a bully. No connection to anyone or anything. A sad and lonely existence for a young woman who had come to expect nothing more for herself. Her only happiness coming from making others miserable.

Flynn Hendrick lived a life completely disconnected even as he struggled to become something more than that boy with Asperger's. He was taunted and teased, bearing the brunt of systematic and calculated cruelty, ultimately culminating in a catastrophic turn of events that brought Ellie and Flynn’s worlds crashing down.

But then Flynn and Ellie grew up.

Until years later when their paths unexpectedly cross again and the bully and the freak are face to face once more.

When labels come to define you, finding yourself feels impossible. Particularly for two people disconnected from the world who inexplicably find a connection in each other.

And out of the wreckage of their tragic beginnings, an unlikely love story unfolds.

But a painful past doesn’t always want to let go. And old wounds are never truly healed…and sometimes the further you try to run from yourself the closer you come to who you really are.


The story was alternatively narrated by Ellie and Flynn.

Flynn has Asperger's syndrome*, which makes him the 'freak' in school.
Enter Ellie, the bully. She made Flynn's life a lot harder than it already was.
Although Ellie was Flynn's personal hell, he still liked her.

It was heartbreaking to read Flynn's POV. It's like: *stab* *twist* *twist* every freaking time!
Story time.
When I was in High school (Middle school for Americans), everyone in our section (incuding me) will tease a certain guy until he cries and gets angry. It even got to the point where all of us were called to the guidance counselor and his mother transferred him to another school. I don't know if he had Asperger's or maybe something else, but he was definitely mentally challenged. And reading this story reminded me of the times we treated him like crap and it also made me think how horrible he must have felt. We were on a Christian school, mind you.

*Asperger syndrome is a form of autism, which is a lifelong disability that affects how a person makes sense of the world, processes information and relates to other people. They usually have difficulties in social communication, social interaction and social imagination.
Source: http://www.autism.org.uk/

Posted by Unknown at 7:56 pm No comments:

Review: All Our Yesterdays by Cristin Terrill

What would you change?

Imprisoned in the heart of a secret military base, Em has nothing except the voice of the boy in the cell next door and the list of instructions she finds taped inside the drain. Only Em can complete the final instruction. She’s tried everything to prevent the creation of a time machine that will tear the world apart. She holds the proof: a list she has never seen before, written in her own hand. Each failed attempt in the past has led her to the same terrible present— imprisoned and tortured by a sadistic man called the doctor while war rages outside.
Marina has loved her best friend, James, since they were children. A gorgeous, introverted science prodigy from one of America’s most famous families, James finally seems to be seeing Marina in a new way, too. But on one disastrous night, James’s life crumbles, and with it, Marina’s hopes for their future. Marina will protect James, no matter what. Even if it means opening her eyes to a truth so terrible that she may not survive it... at least, not as the girl she once was.
Em and Marina are in a race against time that only one of them can win.

All Our Yesterdays is a wrenching, brilliantly plotted story of fierce love, unthinkable sacrifice, and the infinite implications of our every choice.

The story is told by alternating perspectives of Em and Marina.
It is fast-paced, but it took me awhile to take in all the details.

What I loved about this book:

I was about a quarter in when I started to understand what was happening.
I'm the kind of reader who tries to figure out the plot twists, I end up overhypothesizing.
So, everytime I read mystery books, I get so suspicious over everything.

I can imagine Cristin Terrill just laughing at my reactions.

Hello! My name is Summer. I'm a 17 year-old college student, taking up Tourism Management and I love to read.
In this blog, I will be reviewing (mostly fangirling) Young Adult books. This will basically be my outlet for 'feels', rants & etc. I'm an amateur reviewer, and I still have a lot to learn.
I'm excited for what my blog will become and hopefully I'll make a great progress as a blogger and a reviewer.
Other details will be written under the 'About me' section.
Thanks and have a good day! :) xx

View my complete profile
My name is Summer, and I'm 18. I love to read, especially books in the Young Adult genre. Even more particular: Paranormal, Mythology, Contemporary, Romance, Comedy/Humor, Dystopian and a tad bit of Mystery. This blog will contain anything and everything book-related. I'm still learning how to give a proper and formal review. You may see gifs on my reviews, I use it when I can't explain my emotions through words (which is often). I also give 'theme songs' whenever a song reminds me of a certain book.
If you're an author who's looking for a reader that fangirls and recommends books to everyone they know, then I'm definitely the person you want. Or maybe you're a reader who's a fangirl/fanboy like me, then you will feel right at home! :D
Contact me here: reinasummer@gmail.com

Die for Her
by Amy Plum

After the Rain
by Lisa De Jong

When It Rains
by Lisa De Jong
tagged: cried-sobbed-and-wailed

Reclaiming the Sand
by A. Meredith Walters
tagged: cried-sobbed-and-wailed and standalones

Innocent Smiley's Reviews
From a corner in the library

A Book Paradise
The Book Dancer 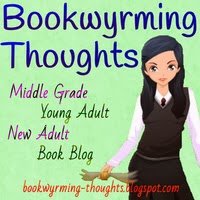